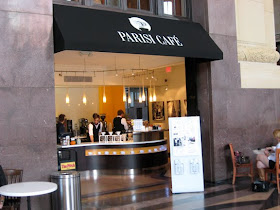 Let’s hop aboard the coffee train.

Robert and I recently attended a tasting event at Parisi Café. Located in Union Station, this is Parisi Artisan Coffee’s first venture into the restaurant business, and it opened in September. Now while I don’t know much about coffee, I do know plenty about sandwiches, so I was excited to try the food. 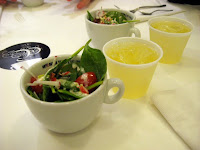 The salads and sandwiches that Parisi Café offers change on a daily basis, pending what local ingredients are available to the chef. Today’s menu started with the Bacon & Blue Salad, which had fresh baby spinach, red onions, radishes and bacon with a buttermilk blue cheese dressing. I loved the use of radishes here -- I’ve always been a radish fan, and I think they’re generally underused in the salad game.

The bacon chunks in this thing were awesome, too. Huge and extremely flavorful. I couldn’t decide which was better -- mixing in the bacon chunks with the other elements for the full flavor explosion, or treating them like marshmallows in Lucky Charms and waiting to savor them at the very end. Either way, you win. (Salads of the day run from $7.50 to $7.95.)

The salad was served with a sample of Bangkok Iced Tea, made with Sencha tea and accented with coconut, ginger and lemongrass. I couldn’t make out much of an immediate flavor when sipping, but the coconut came out pleasantly in the aftertaste. (A large iced tea is $2.65.) 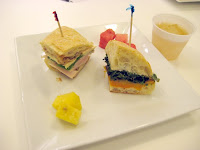 Next we got to sample two sandwiches. The first was the Roasted Squash Sandwich with butternut squash, Tuscan kale, mushrooms, pomegranate vinaigrette and a mild gorgonzola on tasty, chewy French bread. It was a delicious combination of flavors.

The second sandwich we had was Turkey & Brie, made with sliced rotisserie turkey breast, homemade apple butter, baby spinach, French Brie and a whole grain mustard, and it was also on the French bread. I wish the Turkey & Brie was available regularly, because while I’m fairly certain it was fantastic, I’d appreciate the opportunity to eat a full-size one just to make 100% sure. I’m thorough like that. (Like the salads, sandwiches of the day run from $7.50 to $7.95.)

Along with the sandwiches, we had a house-made Ginger Peach Italian Soda that was super tasty -- not overly sweet, with a nicely balanced flavor. It’s made with a combination of Parisi Café’s house-made peach flavor and The Rieger’s ginger syrup. Although it doesn’t look like the Ginger Peach is on the regular menu, Parisi Café does have year-round Italian Soda options that include Mixed Berry, Reiger Ginger Ale and Reiger Cola. ($2.85 for a large Italian Soda.) 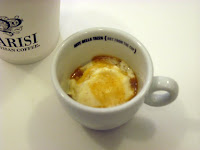 The final items we tasted were Parisi’s Signature Pour-Over coffee, and a Vanilla Gelato with a house-made pumpkin caramel sauce. The coffee is a blend of Ethiopian Yergacheffe and Guatemalan Huehuetenago, which tasted very smooth, even if I have no idea what either “Yergacheffe” or “Huehuetenago” means. ($2.65 for a medium Pour-Over.)

The gelato was very rich, especially with the caramel sauce. Even though it’s not listed on the menu, we’re told you can still order it. Or you can get an Affogato ($3.25), which is the gelato drowned in espresso. I should have grabbed one of these before heading back to the office -- WANT.

Robert and I sat at a table with Scott Connerly of KC Perky and talked with him while getting to try all this goodness. If you’re looking for more info on Parisi Cafe’s coffee and coffee-related expertise, Scott has a great write-up on his site that’s definitely worth checking out, as well as a second opinion on all the eats.

All in all, I’m looking forward to stopping back in at Parisi Café for lunch. I’ll be the obnoxious guy calling at 7:02 every morning to see if they’re going to have the Turkey & Brie that day.