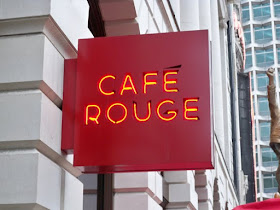 "Hey brother, can you spare some change for a down payment on a croissant?” 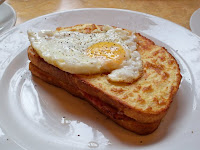 Since it’s right by the London Underground station, Chris and I stopped at Café Rouge on Tottenham Court Road for breakfast. My croque madame was tasty. I also had a rather delicious Americano, because, hey, I’m American, and regular coffee isn’t on the menu anyway.

But what I really want to talk about is the bum that was there.

I barely even noticed him at first -- he was reasonably well groomed and looked sort of like Roman Polanski. Clad in thrift shoppy clothes, he’d taken the time to tuck in his dingy polo.

The bum just kind of ambled into Café Rouge and started muttering to the couple at the table by the front door. One of the servers quickly took note and shooed him out. No big deal.

Then a couple of minutes later the bum came back, only now he was all worked up, harassing the same table but much louder than previously. This time the bum managed to get his hands in the couple’s food before he was chased off.

The Café Rouge staff made the rounds and apologized to everyone for the disturbance. They seemed sincere -- although completely unfazed by what was going on. Like “whatever,” this is an everyday thing. 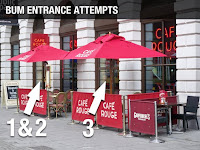 After not even five minutes had passed, the bum returned yet again, charging straight through the outdoor patio and heading directly for the door by Chris and me. Within seconds the staff mobilized into action and sent him scurrying away. Once the bum was out of sight, the Café Rouge employees looked at each other, gave the patrons a slight “What’cha Gonna Do?” shrug and that was it.

Clearly this was not Café Rouge’s first serial-bum-attack-related rodeo. By the time we paid our check and were leaving, a sentry point had been established on the sidewalk out front and the servers were taking turns keeping guard.

In conclusion, from this single experience and taking into account both the bum’s determination and the staff’s military precision response, I believe I can rightly state the following:

All London bums love Café Rouge so much that they must be kept away by force.

And who can blame them? The Gruyere on my croque madame was melted to perfection. Still, future diners, you have been warned. Eat there at your own risk.

This warning only goes for the Café Rouge in London on Tottenham Court Road. I do not know what the bum situation is like at the other locations.
Robert at 8:44 AM
Share