Lunch Blog in the UK, Part 3: The Prince of Wales 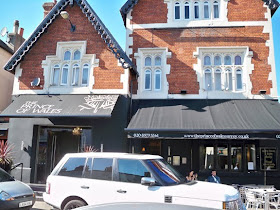 It’s no secret that British food has a justly deserved reputation as being less than stellar. However, at The Prince of Wales, they will totally give you fried cheese as an entrée, and I am 100% on board with that. 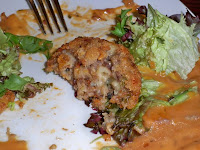 But first, the appetizers. Today’s special was Haggis & Macaroni Bites, which I incorrectly took to mean as haggis served alongside macaroni bites. Since I’ve never had haggis before, I was excited to try it, but this turned out to be little nuggets of haggis and pasta fried up together.

So while I still don’t rightly know what haggis tastes like, these went to show once again that you can fry anything and it’ll taste just fine. Even more so if you put a whisky sauce on it. 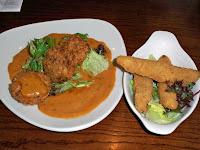 We also got an order of fried pickles, and these may have been the best I’ve ever had. Awesome crunch-to-sour ratio. Technically, they’re offered as a side on the The Prince of Wales’ menu. If more places had a fried pickle side option, I might never order fries again. 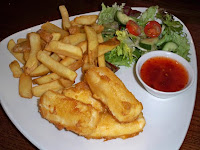 For lunch proper, I was all over the Hand-Breaded Halloumi, described by the bartender as “spongy, but in a good way.” Served with skin-on chips, a side salad and a sweet red pepper and chili dipping sauce, the thick slices of cheese were fried just enough to give them a good crust, and were rather salty without being too much so. This is a dish that would please even the most discerning connoisseur of fried cheeses.

If Prince Charles was there, he must've in the back taking inventory on the haggis or something.
Robert at 8:02 AM
Share