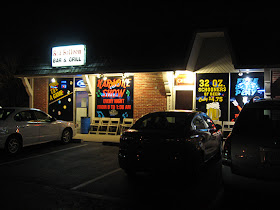 You don’t have to be a regular to sing here, but it helps.

In search of some cheap eats and karaoke airtime, we did Guys’ Night at Red Balloon last month.

Alas, the karaoke was a bust. In our experience the KJ sang three out of every five numbers and called up the regulars before giving any new blood a shot. Fair enough -- your place, your rules. 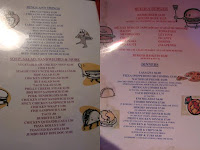 But did we ever find an extensive menu. While it covers all the bar food bases, it’s hard to tell what’s a house specialty -- if anything -- versus what comes out of a can or a box. This became especially obvious when we asked the bartender about the $3 pizza, and she told us it’s, “Basically a Red Baron.”

You know what you’re getting into with some selections, like the pizza rolls and SpaghettiO’s. Others are clearly a dare -- such as the chili, fish sandwich and shrimp dinner.

I’m also fascinated by the lasagna on the menu. At $6, it’s one of the pricier items, which makes me think it’s maybe actually homemade. But on the other hand, I can see it being a family-size frozen Stouffer’s deal. And if it is, do they cook the whole pan just to serve you a single portion? Or do you have to get a verbal commitment to order a piece from six or more patrons before the kitchen will make it? I’d ask for more details, but I don’t want to ruin the mystery. 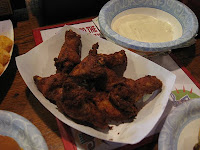 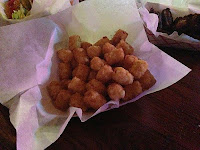 The food isn’t anything you need to go out of your way for, but for the price, it’s better than you’d think. The wings have a nice crispy batter on them, and the tots are tots. The burgers were akin to what you’d get at your average cookout fundraiser/charity event. 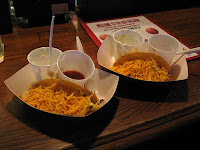 I did find the meat in the tacos suspiciously chunky, leading me to believe they’re made with the same patties as the burgers. Still, Red Balloon’s tacos are no better or worse than the ones at Tanner’s -- and it’s hard not to like a place that has 50-cent tacos all day, every day. 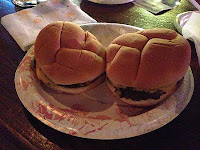 It should be noted that our two burgers came out on a single plate. I guess ordering a bunch of food together automatically means you’re dating. Thanks, Red Balloon.

Meanwhile, a couple of ladies at the bar were ordering drinks by color -- “Pour us a couple of those blue bombs!,” one said. With Red Balloon starting to increasingly feel like a boozed-up Kool-Aid stand, we thought it was time to make our exit.