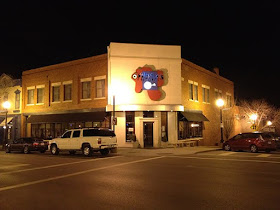 Living large on a two-risotto night.

Shaw and I were excited to attend Ophelia’s Restaurant & Inn last week for a sampling of Executive Chef Bobby Stearns’ new menu. Situated near the Jackson County Courthouse, as I drove past all the storefronts of the local shops and restaurants in Independence Square, I thought it might not be so bad to be called for jury duty. Except, of course, for the actual juroring.

Walking into Ophelia’s, I was shown to the bar and ordered a Manhattan. While sipping on my drink, I noticed a few of the other guests were having what I was told was a Yellow Cake Martini. Apparently it’s a house specialty, so maybe I should’ve tried that. But with its stark interior and dark wood, Ophelia’s strikes me as more of a classic cocktail kind of place.

After a tour of the inn above the restaurant -- which seems nice and I would not at all mind being sequestered in, especially if I could get the suite with a Jacuzzi bathtub and a pitcher of those Manhattans -- everyone was summoned back to the dining room.

We were in good company at our table, Shaw and I sitting with Rachel Ellyn of Everyday KC and Albert Tong of Follow The Eater. Much great conversation was had, and while I can’t remember exactly how we arrived at the following conclusion due to the wine pairing served with each course, we all agreed -- Cocoa Puffs and scotch would make an excellent breakfast.

Previewing the four-course menu, I saw we’d be finishing with a chocolate trio. And because I am a total girl for chocolate, I was ready to get this started. Here’s what all we got to try. 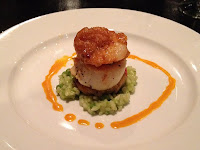 First Course: Seafood Stacker
Sweet pea risotto, crab cake, diver scallop and candied tempura shrimp with carrot butter sauce.
I could’ve eaten a pound of those shrimp, they were so light and crispy. Bonus points for the edible flower garnish, even moreso because as soon as Shaw ate it, a look of panic came over his face and he asked, “You’re supposed to eat that, right?” 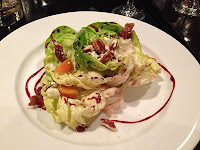 Second Course: Golden Beet Bibb Salad
Crisp bibb lettuce, candied pecans, gorgonzola cheese and roasted golden beets with a port wine vinaigrette.
The texture and color of the beets reminded me so much of sweet potatoes, I had to be reminded they were beets. With the creamy bite of the cheese and the crunchy pecans, the only thing not to like about this was that I had to eat a salad before I could get to the chocolate. 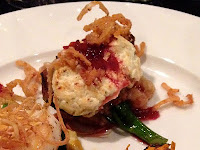 1. Center cut pork medallion topped with boursin cheese on a bed of mushroom risotto, broccolini and finished with a sweet onion jam.
This was the overall winner of the entrees -- tender pork with almost too much cheese, which for me is the correct amount. This is where the aforementioned second risotto came in, too. 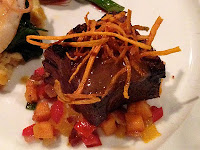 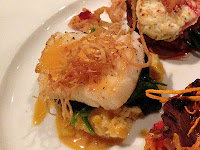 3. Chilean sea bass pan-seared on a bed of sautéed spinach and roasted corn polenta, served with a citrus beurre blanc sauce.
The sea bass was firm but flaky, and the way the polenta and spinach soaked up the sauce made those my favorite sides out of the entrée trio. 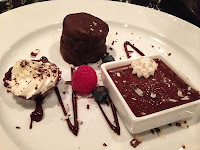 It was a delicious meal, and Ophelia’s would make a fine place for dinner on Valentine’s Day -- they’ve even got a thing going on that night. For $75 per person, you can enjoy a four-course tasting menu plus a samba and rhumba dance lesson. (For $50 per person, you can have the dinner minus the dancing.)

Thanks to Ophelia’s Restaurant & Inn and Will Gregory Public Relations for the invitation. And thanks to Matthew Cornett of A. Bommarito Wines for the wine pairings.
Robert at 5:01 PM
Share