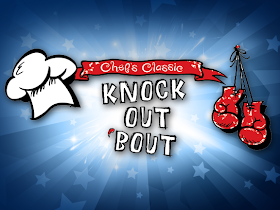 It’s a tough job judging the Chef’s Classic Knock OUT ‘Bout. You must be prepared to gorge yourself on 16 appetizers, and then still be ready for the incredible responsibility of deciding the ultimate victor in the chef vs. chef head-to-head final battle.

Or so we thought. It actually turns out we’re not required to eat any of the appetizers in the first two rounds, since it’s the audience vote that counts in determining who advances. But what were we going to do? Not eat some small bites from eight of Kansas City’s finest chefs?

That’s not how we roll at Lunch Blog. Here’s a rundown of everything we tasted on the road to the main event. 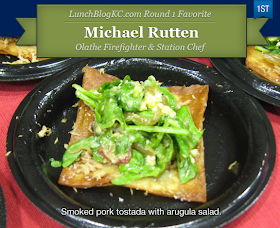 Our favorite aligned with the popular vote, and I feel bad for anybody that caught a glimpse of me unhinging my jaw to Fieri this thing. Michael Rutten’s pork was smoky, the tostada was crispy and the arugula made me feel good about myself on account of it being a green vegetable. 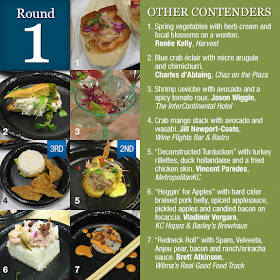 A close second for us was the blue crab savory éclair that Charles d’Ablaing was offering. However, the audience favored Vincent Parede’s Deconstructed Turducken. While I didn’t dig it, I can say that from my experience, it was still exponentially better than Turducken all put together.

As we’ve yet to have a chance to eat at Wilma’s Real Good Food truck, we were excited “Frenchneck” chef Brett Atkinson was on the scene serving his Redneck Rolls. Personally, I thought they could use more Spam — if that’s your main ingredient, I say go all the way and jam as much Spam in there as you can. Searching out the Wilma’s truck did jump to the top of our to-do list, though. We want to try Atkinson’s pork belly beignets. 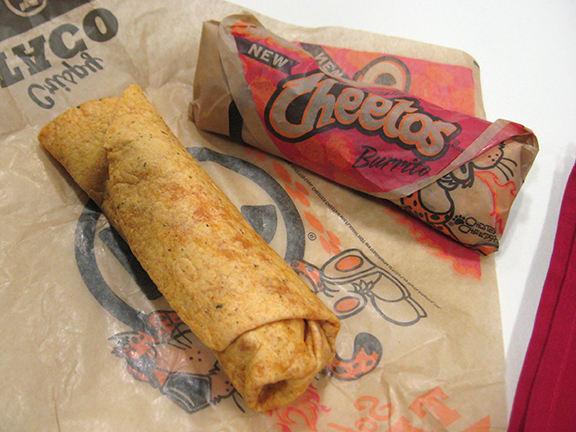 Meanwhile, out of competition, Taco John’s was letting people try the new Flamin’ Hot Cheetos Burrito. We may review it at a later date, but spoiler alert — it’s as delicious as it is so wrong it’s right. 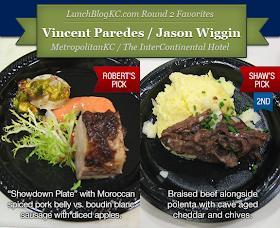 Here we were a Lunch Blog divided, with dishes seemingly attuned to our individual sweet spots. I liked Paredes’ “Showdown Plate,” which he described as pitting bacon against sausage.

But Shaw was a major fan of Jason Wiggin’s braised beef and polenta. “It’s like a stew on a plate!,” Shaw said, practically licking it clean. 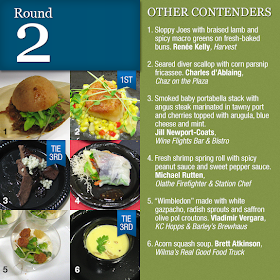 Alas, we’ll never know if our favorites would’ve held up against Jill Newport-Coat’s incredible-sounding portabella stacks, since they were all gone by the time we made it to her station. Somehow we resisted the temptation to eat the display sample at the voting booth despite fellow judge Kimberly Winter Stern telling us it would totally be okay if we did. 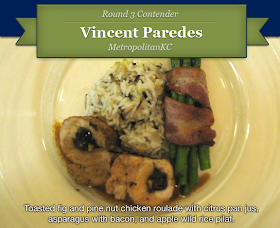 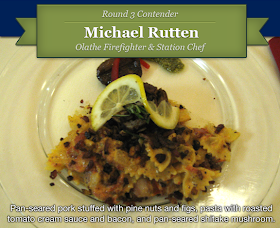 This was an awesome final two. In one corner, we had the 2013 Champion back to defend his title. In the other, we had a firefighter who’d made my favorite thing I’d had all night. Judging this was not going to be easy.

Together with Stern and Father John Torrez of St. Paul Catholic Church, elements the four of us considered included taste, plating and use of the secret ingredients. As for the latter, I was kind of surprised at how bacon wasn’t integrated particularly well into either plate.

Both chefs employed similar strategies with their figs and pine nuts, too. Rutten served them stuffed in pork tenderloin, while Paredes did the same thing but with chicken.

So after some discussion, it came down to taste and plating. Rutten’s food was well worth becoming a fireman just to eat it on a regular basis. However, Paredes’ chicken was perfectly cooked and served with a citrus pan jus that elevated it above his competition to secure repeat victory.

In the meantime, we’ve got a date with a Flamin’ Hot Cheetos Burrito.

Thanks so much to the organizers of the Knock OUT ‘Bout for inviting us back for a third year. For more info about next year’s event, check out knockoutbout.com and like it on Facebook. Proceeds from the evening go to benefit St. Paul Catholic School.
Robert at 1:15 PM
Share