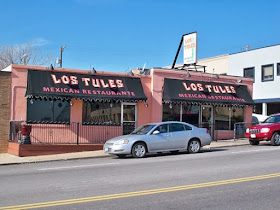 Loosely translated, “Lost tools.” (I know roughly enough Spanish to get me stabbed in Mexico.) 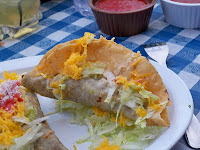 These are seriously awesome tacos, too. They’re fried-shut corn tortillas filled with ground beef, then garnished with a ton of cheese and lettuce. For maximum cheese delivery, turn your taco parallel to the ground and eat it like a stuffed nacho. Never let cheese go to waste. 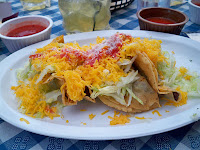 An order of three could conceivably be a meal -- not that I’d ever recommend stopping at a mere three tacos. Besides, the beauty of a four-hour taco special is that you can start with a few and then get another taco every time you get another drink. 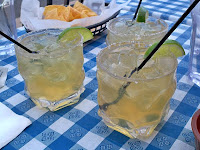 If only Los Tules also had a happy hour deal on beer. They do have house margaritas on the rocks on special for $4, and they’re tasty enough but I can only drink so many margaritas.

The Los Tules happy hour has become a favorite spot for me and my friends, but somehow we’d failed to realize it’s Monday through Wednesday only until we stopped in a couple of Fridays ago and were denied $1 tacos. We must usually be in a taco mood more toward the beginning of the week.

Turns out that fried corn tortilla tacos aren’t even on the Los Tules menu proper. Our server told us we could order them at a non-happy hour price, but having come to take $1 tacos for granted I was afraid I’d feel like I was getting rooked. Taco remorse is no fun.

Of course, we were still going to get some tacos, and Los Tules has plenty of other kinds. They’ve got fried flour shell tacos, straight-up regular shell tacos, soft tacos, carne asada tacos and fish tacos all on the menu.

As Josh, Leisha and I sat there overwhelmed by our taco options while continuing to live in denial that no $1 tacos would be coming our way, Heather took charge. “Bring us an assortment of 20 beef tacos,” she said. For some regrettable, hazily remembered reason we downsized the order to a dozen.

Behold the majesty of the taco platters that they brought us. 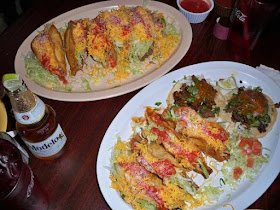 We should’ve gone with Heather’s original order of 20, because it took us a scant 10 minutes to demolish all of these. They were all winners -- Josh especially liked the carne asada -- although the fried corn shell $1 tacos are still my favorite. 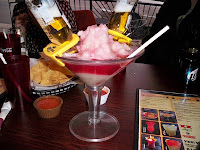 Since it was my birthday, my friends also ordered a Volcano Margarita ($14) for the four of us to share. That’s 40 oz. of margarita action with a couple of mini Coronas dumped in because why not. This was exciting, as I am always in favor of ridiculously oversized drinks. 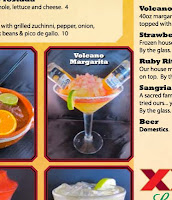 A couple of sips in, we all agreed the Volcano Margarita tasted kind of fishy. It didn’t help that the picture on the menu makes the frozen part of the margarita look like there’s a shrimp cocktail piled in the middle. So with my friends bailing on the Volcano Margarita, I was left to power through it solo. Mission: successful. Coherence: questionable.

After total taco and margarita annihilation, we headed to The Jacobson for Manhattans, which I highly recommend. Due to Volcano Margarita-related reasons, however, that’ll have to be another post for another time.