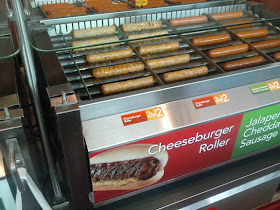 What we’d give to spend a day at the Roller Grill Laboratory.

Back in February when Shaw and I gave our take on QT’s Buffalo Chicken Bites, I predicted that the next QT rolling food would be stickburgers. 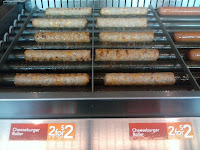 Soon as we saw them, we couldn’t wait to give them a try -- especially once we noticed all the grease the Cheeseburger Rollers were caking onto the grill. That’s how you know a burger is good. 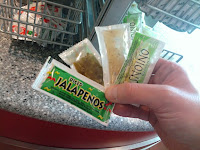 We each put a Cheeseburger Roller on a bun and started loading them up with condiments. Ketchup, mustard and onions from a packet for me.

Flecked with cheese inside, Cheeseburger Rollers taste like a cross between a hamburger and brown-and-serve breakfast sausages. They’re “burgery.” Like if you’d never had a burger before and someone was to describe a burger to you, this is how you might think a burger would taste. 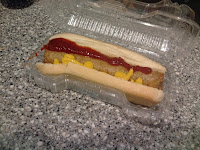 Cheeseburger Rollers are a valiant effort, if not a thoroughly successful one in our opinion. Still, we here at Lunch Blog admire QuikTrip’s tenacity, and would like to offer up these suggestions for QT’s next rolling creation:

Also, there’s got to be a way to adapt Cheesy Blasters to the roller grill. And how has QuikTrip not yet brought back Frankenfurters? Or am I the only person that remembers those? Frankenfurters were hollow hot dogs filled with chili that you could get at the grocery store, and I think the last time I saw them was in the ‘80s.

What would you like to see added to the QT Roller Grill Wonderland?


Update 7/29/20: Who remembers Frankenfurters? Chimpotle does -- and he remembered they were actually called Frank 'N Stuff, too. Here's a commercial. 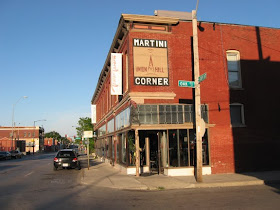 Nerdery for the win.
We chose Tower Tavern for Guys’ Night the other week for two reasons. Number one, we wanted to play in the Tuesday night trivia game. Number two, the menu features a dish called “Pork Wings,” and you know that’s something we’d have to try. 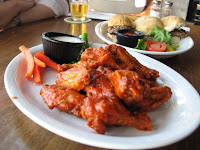 Even though the game doesn’t start until 8 p.m., we arrived a little bit before Happy Hour ended at 7 so we could take advantage of the $5 appetizers special. We got an order of buffalo wings and the Tower Sliders, on the latter opting for the Deluxe version, which runs $1 more. Since the special doesn’t include Pork Wings, we decided to wait until later for those. 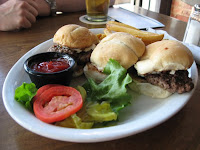 The dollar extra for the Deluxe Tower Sliders was well spent -- they’re excellent. You get three of them, and each one easily has 3 oz. of flavor tucked in the 2 oz. patty, but it’s the garlicky cream cheese and bacon that really make them. They come with some fantastic fries that have just the right crispy-potato ratio, too. As for the wings, they were good, albeit nothing out of the ordinary.
Shortly before the game started, the host stopped by our table to ask what our team name was going to be, and for lack of any better options we went with Fred. During the first round, we stuck mostly to the category of Three Word Band Names. We almost got stumped on who did “Desperately Wanting,” on account of Better Than Ezra being one of the world’s most forgettable bands ever.
We also got to pick up some extra points when a team of three guys at the bar called Jake, the Fatman & Cynthia were unable to answer their question from the Games category, and challenged us with it. The question was: What does LARP stand for?
Come on, if anybody in there was going to know what LARPing was, it was us -- it’s Live Action Role Playing. Perhaps our nerdery isn’t as outwardly apparent as I thought.
It became surprising all the more that Jake, et al. didn’t know that answer, when between rounds I overheard them talking Doctor Who. Took nearly all my self-restraint not to join in and make that my second Time Lord-related conversation of the day. (I’ve been listening to Chris Hardwick’s Nerdist podcast lately, and it’s empowered me to let my inner geek flag fly much more proudly.) 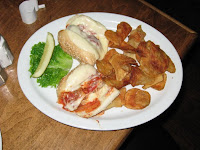 Before the next round started, we ordered a meatball sub ($7.50). While the meatballs themselves were tasty, overall I found it undersauced and o-cheesed, served on a roll that was too soft for this kind of sandwich. Side-wise, we got the house-made potato chips, and they were good, if not nearly as good as the fries we’d had with the Deluxe Tower Sliders. 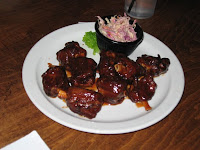 At long last we ordered the aforementioned Pork Wings ($9), too. They’re pork shanks that are braised and flash-fried, and tossed in a bourbon-cider barbecue sauce. Pretty delicious. An order of these plus an order of buffalo wings would be about the best thing you could pair with the $2.50 Budweiser and Bud Light Tallboys that are the Tuesday night beer special.
During the second round of trivia, which included a Beatles category that I was especially excited about, we were able to build on our lead. In the category of The Afterlife, one of our opponents was given the question: Who was the jackal-headed god of the Egyptians who advocated the practice of mummifying bodies?
They missed it, and the question went out to the house. Conferring with my teammates, I guessed Mumm-Ra, but that’s actually the archenemy of the Thundercats, not to mention total dork city. Luckily, Shaw knew the right answer was Anubis, which really is just about as dorky.
Before the Final Jeopardy-style ending round, there was a speed challenge that we won by naming five characters from The Lord of the Rings the fastest. Truthfully, I’m a little ashamed of this. Sure, I dig Doctor Who, but Tolkien geeks are a whole other level of nerd that I don’t care much to associate myself with.
Our last question of the night came from the category Capitals, which meant Shaw was going to have to field it singlehandedly, because Dorsett had to leave early and I don’t know real stuff. The question was: Name one of the two state capitals that border another state. Thankfully, none of the other teams got the answer either, and we won the big game.
Now if the category had been something like Space Capitals with a question along the lines of, “Name the home planet of the Time Lords” -- that, I would’ve been all over.
This marked the first time I’ve ever been on a victorious bar trivia team -- and frankly, I was due for a win. Considering we made it happen while eating Pork Wings, I think that makes for a nice little piece of poetic justice.
Happy Hour at Tower Tavern lasts from 4 to 7 p.m., Monday through Friday, with select appetizers for $5. Trivia goes down every Tuesday at 8 p.m. It’s free to play, and the prize is bragging rights, which along with $9 will get you an order of Pork Wings.
___________________________________
401 E. 31st Street | Kansas City, MO 64108