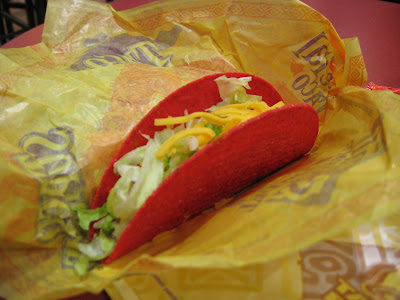 That’s what Dorsett said when he called Shaw and I on the way to this month’s Guys’ Night at Dos Hombres in Red Bridge, where they were supposed to have all-you-can-eat tacos on Tuesday nights. Thwarted! Scrambling for a Plan B, we opted to hit Taco Bell before going on an expedition for BarQuest, the continuing search for a neighborhood bar worth hanging out at in my area of town. 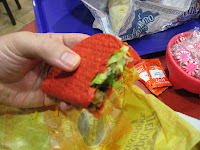 I’d been jonesing to try the Volcano Taco, and for 99¢ it wasn’t bad. Near as I can tell, it’s your standard Taco Bell crunchy taco in a red shell with one major difference -- lava sauce, a kind of politely spicy nacho cheese. Shaw’s Volcano Taco, however, was severely under-lavaed. Taco Bell, if you are going to call it a Volcano Taco, there better be Mt. Vesuvius amounts of lava sauce on there. Otherwise, it’s nothing but a red taco.

I was also excited to try the new Triple Steak Burrito, which looked way beyond the limits of awesome when I saw a commercial for it amidst drinking heroic amounts of beer at the Crawl For Cancer last Saturday. Yeah, one bite in, and I realized how wrong it is to pay $3.99 for anything at Taco Bell. I mean, for a couple dollars more I could go to Chipotle. 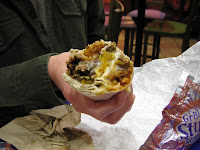 Besides, even though the Triple Steak Burrito’s “authentic” carne asada steak and fire-roasted salsa are pretty good, there’s Taco Bell rice in there. That’s fine in a Grilled Stuft Burrito where quantity of fillings is what it’s about, but in any other case, Taco Bell rice adds zero. All it does is take up space. Full disclosure: I’ve got a major aversion to Taco Bell rice stemming from my disappointment with the Cheesy Beefy Melt and how it turned out to be like one-third rice. That’s not a Cheesy Beefy Melt. That’s a Cheesy Beefy Ricey Melt -- and might as well be a Cheesy Beefy Sawdust Melt.

Not exactly sure what I thought the Triple Steak referred to when I saw the commercial. Certainly I didn’t believe there were three kinds of steak in it. Okay, I did, but cut me some slack -- to prove how much we truly despise cancer, we were dominating the beers big time. Rather, it’s called the Triple Steak Burrito because it’s got three times the steak of a Steak Burrito Supreme. Which I’ll go ahead and point out is so supreme, they don’t bother putting rice in it.

At $3.99, the Triple Steak Burrito made me nostalgic for the long gone 59¢ 79¢ 99¢ menu, when hardly anything the Bell served broke the $1 barrier. Aside from the Volcano Taco, I’m having a hard time getting excited about anything on the current 79¢ 89¢ 99¢ Why Pay More? Value Menu. Cheese Roll-Up? Eh. I so took for granted the days when I could get a Double Decker Taco or a Chili Cheese Burrito for less than a G. Washington. Such sweet memories. 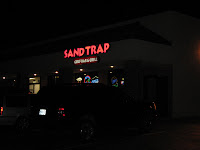 En route to Taco Bell, we passed The Sand Trap at Blue Ridge & Holmes, and decided to give it a shot for BarQuest. (In a future entry, I’ll try to recap expeditions thus far to the Daily Limit and R.C.’s Back Door Bar & Grill.) With some links-related decor and Golden Tee, The Sand Trap was friendly enough -- they gave us a free round and kept the popcorn coming. But ultimately this place just wasn’t our speed. Especially considering none of the guys in attendance actually play golf.