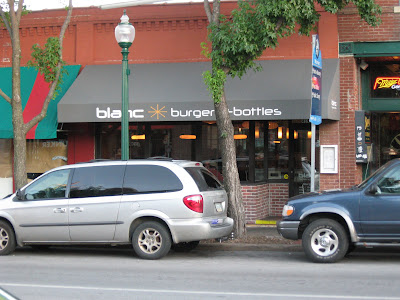 I feel like I have to wear a tie to impress my burger.

For guys’ night this month we checked out Blanc Burgers + Bottles, a highfalutin’ burger joint in Westport. The gourmet burger is a tough draw. On one hand, it’s great to get something fairly commonplace done really well. But on the other, if you’re used to paying about $8 total for a burger and fries, you may feel a sting when you get the bill. 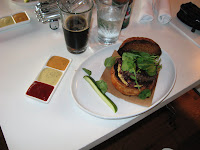 There’s no shortage of options when it comes to the bottles at Blanc. Aside from the 100+ beers, there’s all kinds of soda and other choices ranging from the standards to the questionable -- Root Beer Milk, anyone? If you want, you can have a milkshake, soda float or even a beer float.

This being guys’ night, we stuck to the beers -- non-float, thank you very much. Out of the ones we had, the big winner was Harviestoun’s Old Engine Oil Black Ale, a stout with a flavor characterized on the bottle as viscous, chocolatey and roasty. Despite having recently had a bad experience with Arcadia Ales’ Scottish Ale, Robert went ahead and tried that brewery’s HopMouth Double IPA and liked it quite a bit. I thought it tasted like dirt, although to be fair I’m not a fan of IPAs.

Looking at the menu, both Robert and I immediately gravitated toward the Pork Burger and its promise of a crispy, slow cooked patty. We decided to split that and another burger -- but we had trouble choosing between the pepper-crusted Au Poivre with its creamy green peppercorn sauce, or the American Kobe, mainly because how often do you get to have a $12 burger? (That $12 does not include a side, by the way.) Sadly, Blanc was out of the Pork Burger, so that took care of that.

We couldn’t taste the $12 in the American Kobe. It was pretty much just a burger. The Au Poivre was a completely different story, though -- so perfectly spicy, I may have blacked out a little eating it. 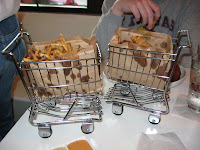 Sides are on the menu a la carte, literally served in small stainless steel shopping carts. We got an excellent order of Boulevard Pale Ale Onion Rings that were crunchy and heavily battered. We also got the truffle fries, which were good, but in retrospect I would have gone with the sweet potato fries. Big ups to the homemade condiments -- out of the three varieties that each side comes with, the chipotle aioli and mustard are pretty fantastic.

Voytek was with us, too. Apparently the ladies at the next table were eavesdropping -- as they were leaving, one of them told us, “I found your conversation to be very interesting.” This was highly suspect, as while I can’t say with 100% certainty what we were talking about, I’m pretty sure it was some kind of comic book minutiae. Then she told us to check out her community radio program that airs at 3 in the morning, and we figured out what was really up.

All in all, good food and good beers, even if I did have some sticker shock when my bill came to just over $30. Especially considering I’d had only the equivalent of a burger and side plus three beers. Admittedly, they were fancy beers, but that still feels a bit extravagant. The time to go to Blanc is lunch -- that’s when you can get a burger and half side for only $8. 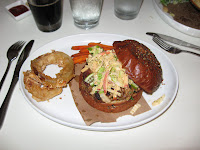 UPDATE 7/25/08: We went back a couple of weeks later with some coworkers for lunch so we could try the Pork Burger -- Robert was so looking forward to it, he said if they didn’t have it this time he was “going to experience a meltdown of epic proportions.”

Bummer that the Pork Burger was merely okay, not so much crispy as simply a patty of shredded pork. We got to try the sweet potato fries this time around, and those lived up to our expectations. Robert ordered a Mexican Coke, made with pure cane sugar unlike American Coke, but couldn’t tell much of a difference in sweetness between that and the stateside variety.