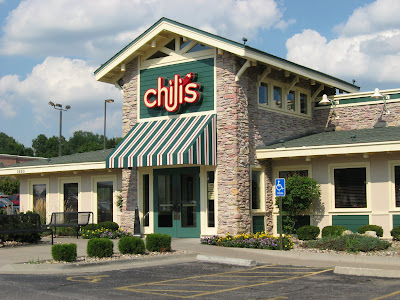 Finish your plate -- there are people starving at T.G.I. Friday's. 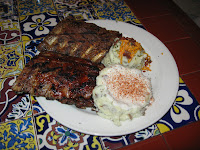 Robert and I ordered up a Jalapeno Smokehouse Bacon Big Mouth Burger, and the Baby Back Ribs Mix & Match Combo with a half rack each of Habanero and Memphis Dry Rub. The ribs came with two sides, affording us the opportunity when asked which two we wanted to reply, “Mashed potatoes. Both kinds.” For the record, those are loaded mashed potatoes, which have all your standard baked potato toppings, and mashed potatoes with black pepper gravy.

If that sounds like a gigantic amount of food, well, that’s because it was. Overall I was really impressed with the way the burger balanced a good amount of flavor with the heat of the jalapenos. The ribs were okay -- between the two flavors I liked the habanero sauce better. The mashed potatoes were both decent, but I’d recommend the black pepper gravy if you’re only getting one.

Side Note: One reason I prefer Chili’s to Applebee’s is that nowhere on their menu will you find anything called “Riblets.” Riblets sound gross. It makes me think of the McRib sandwich with that meat patty molded to look like it’s still got bones in it, the finished effort roughly as convincing as if they’d used a Play-Doh barbecue playset to make it. Shudder.

As for the rest of our party, Zach got the Triple Dipper, Dylan got the Southern Smokehouse Bacon Big Mouth Burger and Scott went with the Fajita Quesadilla -- although how Chili’s missed naming it the Fajitadilla escapes me. Wells got the aforementioned Smokehouse Bacon Triple-the-Cheese Big Mouth Burger, but refused to utter its ridiculous name out loud, rather just pointing to it on the menu and saying, “That one.”

I picked the wrong day to wear a black polo and jeans, since when we got there I discovered that also happens to be your standard Chili’s server outfit. The guys tried to get me to walk around chatting up customers and handing out cards like I was the manager, but I was a chicken.

Lunch Blog Fun-tivity Zone!
Combine anywhere between three to 12 words below and make your own delicious Chili’s entrée!