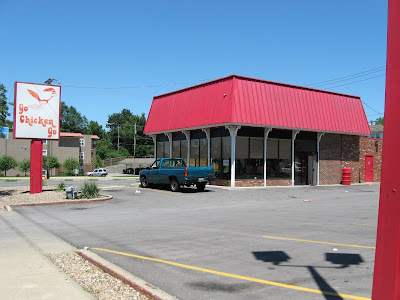 That coyote's after you -- wait.

You could go to KFC, Popeye’s or Church’s, but last I checked the Colonel and friends won’t hook you up with chicken gizzards and livers. So ever since I discovered those are on the menu at Go Chicken Go, I’ve wanted to give this place a shot. 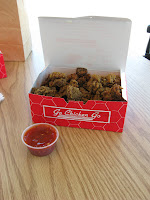 Shaw and I split a full order of gizzards and livers. My mom used to make fried chicken livers back when we lived in Louisiana, and I loved them -- in fact, I don't think before today I'd had any since then. The chicken livers at Go Chicken Go were pretty good, although I quickly figured out it was only going to take a few to satisfy my craving. I actually liked the gizzards better. They were a delicious vehicle for the fantastic hot sauce they came with. Our lunch friends trying all this for the first time didn’t seem to be fans of either. But for me personally, the gizzards and livers were right on. Even if a full order turned out to be overly ambitious, given that both Shaw and myself had ordered our own Fried Chicken Snacks. 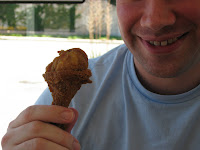 With your Fried Chicken Snack, you get two pieces of chicken, mashed potatoes and gravy plus a roll. Calling this a “snack” is like saying the moment when our Jayhawks won the 2008 NCAA tournament was “nice.” It’s an understatement of massive proportions. Nevertheless, I found exactly what I wanted inside this red-and-white box with the sweet, old school, Road Runner ripoff logo that shows a yardbird making tracks so fast it's kicking up a cloud of dust -- straight-up great tasting fried chicken. Hot and crispy and juicy. Probably could've done with a gravy that wasn't so buttery on the potatoes, though.

We brought the rest of the gizzards and livers back with us to the office, where there sat on the lunch table the last of the cake from a birthday party our agency hosted yesterday. Hating to let some perfectly good leftovers go to waste, we hollowed out a piece from the bottom and stuck a gizzard inside. Thus far nobody has gone for it. 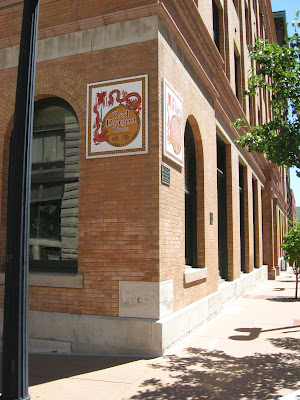 Hello, I’m Hannibal Lecter and I’ll be your waiter today.

At Red Dragon, you can get a lunch special that includes soup, a main dish, fried rice and your choice of an egg roll or crab rangoon for $6. But let’s skip right to the best part of today’s action: Because they messed up Dylan and Troy’s orders and brought them crab rangoons, we scored those while our lunch friends waited for their replacement eggrolls. Surprise bonus crab rangoon -- ba-dam! 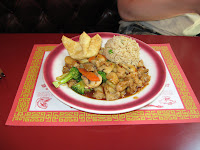 Per Lunch Blog rule #1, for my own order I got the Red Dragon Chicken, asking for it as spicy as they’re willing to make it -- my standard practice at any and all Chinese restaurants. It was pretty good, like a non-fried General Tso, even if it was hardly spicy. Pretty much par for the course. In instances like this, I’m always thankful for the sweet sinus-clearing burn of Chinese mustard. Shaw got the Triple Delight, and felt roughly the same about his lunch as I did mine. 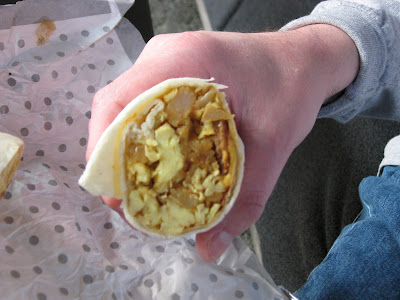 I’ve been getting the McDonald’s breakfast burritos for years. They’re delicious. So when I saw that Ronald McDonald was pushing a new fancypants burrito called the McSkillet, I had to try it. Big mistake. Here are the major reasons why.

While we’re on the subject of McDonald’s, let’s talk about the Snack Wrap. I had one of these not too long ago, and I’m a fan. It’s basically a chicken soft taco, and you can have your chicken either grilled or “crispy,” which is code for fried. So what you get, assuming you’re making the right choice and getting it crispy, is a Chicken Select strip with cheese, lettuce and your choice of sauce inside a tortilla. I got mine Chipotle BBQ, which tastes exactly like regular barbecue sauce but sounds sort of gourmet. Fried plus tortilla? It’s my fast food kryptonite.

And, it’s a snack! Says so right there in the name. Like an apple, or perhaps string cheese. Clown, you are diabolical. 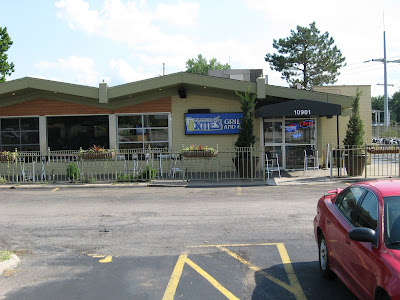 $2 all-you-can-eat tacos? Get a few bar food enthusiasts together and that’s more than just a Tuesday night special. It’s a challenge. So for April Guys’ Night, we decided to check out Kite’s. 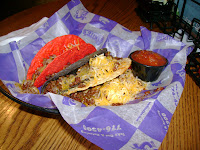 Are the tacos any good? Actually, they’re a notch above, although simultaneously nondescript. I wouldn’t feel ripped off if I paid a dollar or so for one. But taco quality is hardly the point when for a mere two G. Washingtons they will bring you basket after basket of tacos until you tell them to stop. Or at least until 8 p.m. when the special ends.

Here’s the stat that says it all: Each Guys’ Night attendee was able to get his individual CPT (cost per taco) down to under a quarter.